You are here: Home > Home

As one of the best-connected cities in the world, London’s infrastructure is perfectly suited for business travel. With a 24/7 transport network and wifi widely available, it’s easy to find your way around. And when in doubt, it is often just a short walk to the next venue.

Choose from one of London’s six international airports or arrive via the high-speed Eurostar.

One of the most advanced airports in the world. Pre-booked coach bays are available at all terminals, meaning your delegates can enjoy a seamless arrival. The fastest way to get into London Paddington is by taking the Heathrow Express, which runs every 15 minutes. Find a full list of options on Heathrow’s website.

Gatwick Airport has connections to around 230 destinations in 70 countries. There’s a train to London every three minutes, with the quickest option being the Gatwick Express (a 30-minute non-stop journey to London Victoria). Find everything you need to know on Gatwick’s website.

Stansted is one of Europe’s fastest-growing airports and offers direct travel to London. The Stansted Express is the quickest way to transport delegates, with trains departing every 15 minutes and taking just 47 minutes to London Liverpool Street Station. Find all options on Stansted’s website.

London City Airport is a popular choice for business travel to London. The Docklands Light Railway (DLR) is the fastest route into the city, with trains departing every eight to 15 minutes and journey times lasting no more than 30 minutes. Find out more on London City’s website.

Delegates can reach London by train in just under an hour. The purpose-built train station is a two-minute walk from the terminal and runs up to eight services an hour to London Liverpool Street Station. Explore your options on London Southend’s website.

For many business travellers arriving from mainland Europe, the Eurostar represents a fast, efficient and often cheaper alternative to flying when organising your corporate business travel. Group travel can be made extra special by hiring a whole carriage. Explore Eurostar’s group travel page. 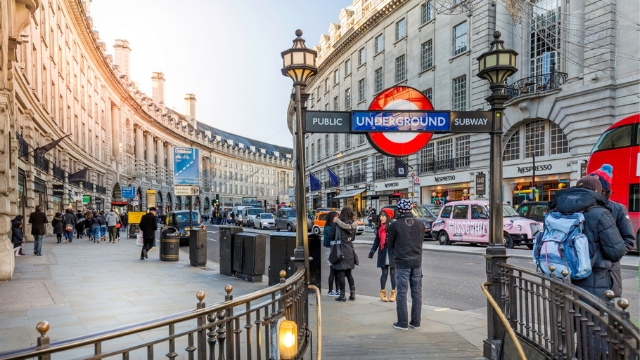 With nine zones and 11 colour-coded lines – the oldest underground system in the world is a brilliantly efficient and easy way to get around the city. For late-night events, delegates can benefit from the Night Tube.

Save time on group orders in London

As an official Transport for London (TfL) distributor, the London Convention Bureau team can help you organise group Oyster cards ahead of your event, saving you precious time. A card costs £5, doesn’t expire and comes pre-loaded with your chosen amount of credit, so it’s ready to be used by your delegates. A minimum order of 50 cards apply. Please allow two months for this process.

Take advantage of this offer

Get in touch with the team.

Thanks to the Elizabeth Line, travelling in London is set to become much easier. From Heathrow Airport, it will take only 28 minutes to get to London’s West End, 34 minutes to reach the financial district of the City of London and just 43 minutes to travel to some of the capital’s biggest event venues, including the ExCeL London and O2 Arena.

Find out more on Crossrail – one of Europe’s largest construction projects.

Other ways to travel around London

Send us your proposal